Trending
You are at:Home»alps»Lac de l’Hongrin
By Markus Albert on 11/07/2014 alps, hybrid, switzerland

The artificial lake Lac de l’Hongrin has been a destination I wanted to explore since I came to the area (21 years ago !), although first on a motorbike. However I was always a bit afraid of driving up that steep, narrow cliff road from Yvorne, for which reason I never rode it. Last Thursday was finally the day I decided to climb up to that beautiful place on my crossbike from the small wine growing village of Yvorne, just next to Aigle in the canton of Vaud.

The road from Yvorne is steep, narrow but lovely and passes two nice villages before vanishing into the forest and becoming a spectacular cliff road with a very nice tunnel stretch, including stunning views to the opposite side of the Rhone valley.

On my way up to the highest point, which is reached a few hundred meters after the tunnel, I stopped several times to shot pictures. 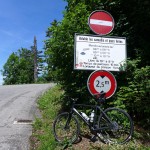 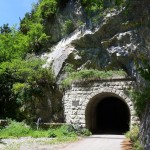 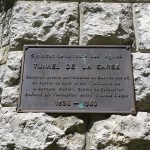 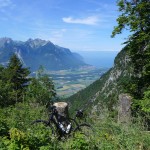 The tunnel itself is bent, unlit but not scary as it has several sort of “windows” in the form of holes cut into the rocks, which provide enough light to cycle through without a headlight. For safety reasons I nevertheless mounted front and rear LED lights but no other vehicle passed through it while I was inside. 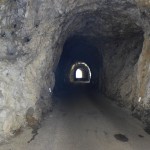 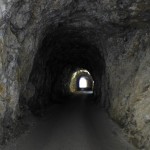 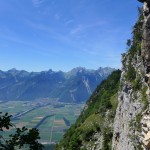 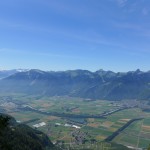 The last stretch from the small village of Luan up to the tunnel was the nices part of that road and two Mercedes SL passed me driving down. When I went through the tunnel, I wondered how they managed because it is not very wide… 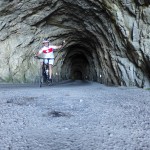 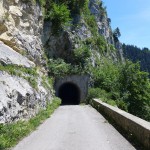 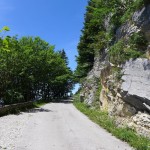 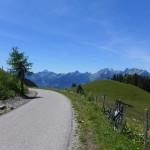 A few hundred meters after the tunnel the road gets wider and bends eastward to follow the topography of the mountains high above the lake. Soon the military zone of “Petit Hongrin” is reached.

The traffic is usually regulated due to military exercise at two places of this wonderful spot. For details please consult the following page: http://www.leysin.ch/fr/Transports/route_hongrin

The road is not completely flat but until Lecherette there are no serious climbs or descents anymore. Funnily all bridges (nearly 50 !) are numbered, probably for military reasons. 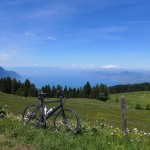 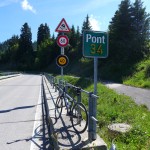 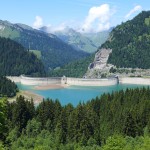 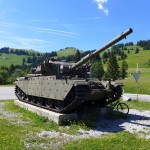 I had lunch in Lecherette and asked the waiter if the road up to Col de Sonlomont was paved, which he confirmed, so I decided to continue my ride on that small, sometimes steep but wonderful narrow road. I passed many farms and had spectacular views to the lake and the surrounding mountains. Col de Sonlomont is not very special and not even signposted. It can also be reached from Chateaux d”Oex and the lake, but only on  a MTB. 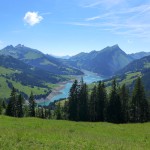 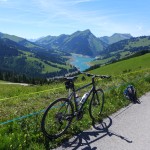 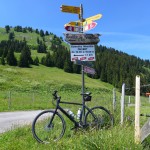 Nearly at the end of that nice and perfectly paved road is a “buvette” where I stopped for a beer and chatted with a young boy who was the only person present. He said he comes from Vallais and spends his holidays with his grandparents here at the farm, helping out in the buvette. For all the chatting (mainly about football) I forgot to pay my beer and only noticed after about half a kilometer on the bike. I quickly rode back, paied my debts (tip included) and headed back to Lecherette, from where I returned on the southern lake road until the junction with the road up to Col de Pierre Moelle. This small, paved road is closed to public transport. I met nobody while cycling up to Pierre Moelle, a climb which starts gently but gets steeper and steeper as one approaches the summit at nearly 1700m. It was the last climb of the day and I was pretty knackered when I reached the top. 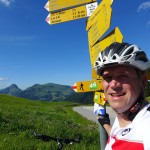 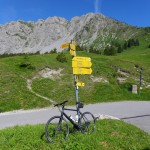 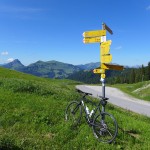 The road down the other side was in a much worse state (many wholes and small stones) but I was warned already by a motorcyclist whom I met at the top. There is a restaurant at the col but unnfortunately it was closed. I descended carefully and slowly (unusual) in order to reach the road coming from Col des Mosses and finally let it roll at high speed down to the bottom at Aigle where I took my last pictures and a well deserved beer in the center of Yvorne. 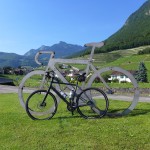 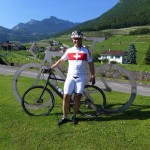 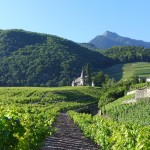 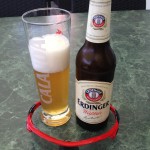 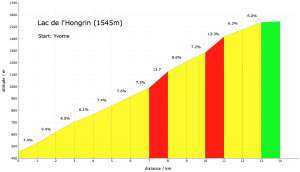