I have dreamed of climbing this col since many years but never dared to try it. Finally last Saturday this dream came true and it was a perfect autumn day without a single cloud and hardly any tourists on the road. As it was my first ascent of this famous Tour de France giant I chose the classical route starting at Saint Michel de Maurienne, about 2h by car from Geneva. Col de Telegraphe is the first part of the 35km climb and ideal to get warm for the major secoond part, which starts right after leaving Valloire, a ski station at around 1450m. At this time of the year it resembles a ghost town. 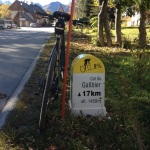 a long climb ahead… 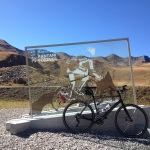 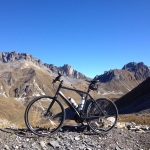 As usual I brought a backpack full of fruit, energy bars, gel and my technical gear. After conquering Col de Telgraphe I surpisingly noticed that I had forgotten the battery of my Lumix camera (!). Luckily I brought the reserve battery for the iPhone so I could at least take some pictures, although the quality is not the same. The recording of the trip however got somehow messed up while taking pictures and only the Telegraphe climb got recorded.

The first pique-nique spot was half way between Valloire and Plan Lachat, beside the road and for the the second food stop I chose the Pantani monument, already above 2000m. 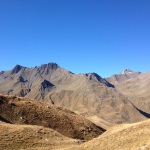 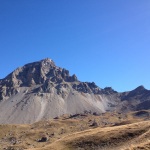 5* menu for the eyes 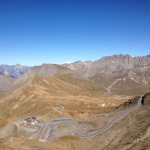 view back from the top

The tunnel was open for traffic but fortunately not many cars and motorbikes disturbed the silence. The Auberge just opposite of the tunnel was already closed. 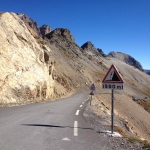 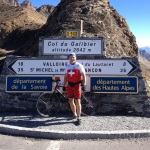 The views from the summit towards the Massif des Ecrins with the southernmost alpine peaks above 4000m, as well as back towards the North including Mt. Blanc were fantastic and the sky was cloud free.

Will, my cycling friend has compiled a nice page with historic facts about this fantastic place:

A brief history of Col du Galibier by Will