Trending
You are at:Home»italy»Mount Etna – South and North side
By Markus Albert on 23/05/2014 italy, roadbike

Profiting from a team building trip to Sicily I decided to rent a road bike together with a friend in order to climb the two possible roads up the Etna. Mount Etna (3329m) is the tallest active volcano on the European continent and the highest mountain in Italy south of the Alps. Mount Etna is one of the most active volcanoes in the world and is in an almost constant state of activity.
The highest elevation one can reach on a road bike is situated on the south flank and culminates at about 1930m at Rifugio Sapienza – our first destination.

After a warm up ride along the coast heading north from Catania, the biggest city in Sicily, we first climbed to Zafferana Etnea where we had a slow food lunch on a park bench, before attacking the climb to Rifugio Sapienza. 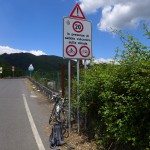 no ashes today – we continue… 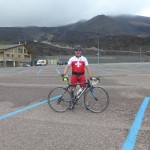 cool and windy at the top ! my Norwegian friend Lasse is very happy too ! 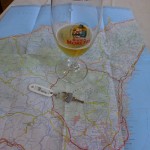 The southern flank of Mt. Etna is the main tourist hub with bus loads of tourists driving up every day. The majority of buses and cars however drive up from Nicolosi and descend to Zafferana Etnea. Fortunately we decided to ride up from Zafferana Etnea, so we only had the traffic on the other lane and hardly any car or bus in our direction. The landscape turns more and more wild and (lava) rocky as one leaves the village and gains in altitude.

The following day we decided to take a taxi to Zafferana Etnea to avoid the dense traffic at lower altitudes, especially the zone around Catania. Italians drive fast and not always respect traffic signs. In fact they interpret traffic signs and lights more as recommendations than as obligations 😉 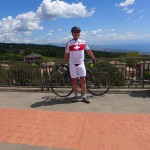 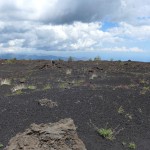 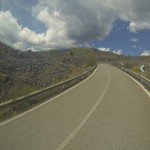 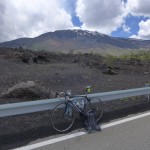 Basso at the top 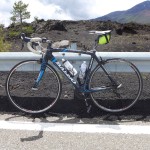 happy at the top ! 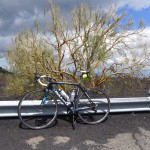 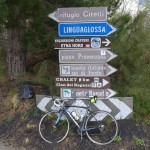 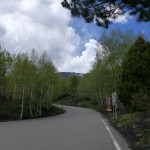 However they very much respect cyclists and at no moment we felt being in danger. Our rental bikes had full carbon frames and were pretty good, although I had a bit of trouble with the gears as they were not perfectly adjusted. During three days of cycling, the only technical problem we faced was a punctured tire on the last day, 2km before reaching the hotel…bad luck. 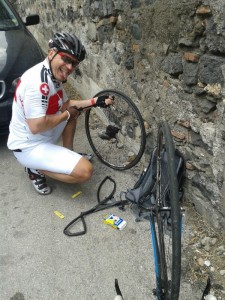