Our third trip on the MTBs started from home towards St. Cergue and initially we wanted to visit the cheese farm “Les Fruitieres de Nyon”, but once arrived at St. Cergue we decided to continue our climb towards France and closing the loop by returning via Col de la Faucille. Instead of following the road with heavy traffic, we chose an alternatice path away from traffic leading through farm land at the foot of La Dole mountain. We had a detailed cycling map with us but still got a bit lost as the forrest path abruptly stopped and transitted into a grass path which was difficult to identify. Thanks to our well developped navigation skills we nevertheless managed to stay on track and finally found the connection to the gravel and later tarmac path connecting to the road to Lau Baudichonne, a place which I have already climbed several times from the Swiss side of the Jura but never from today’s side.The weather got really nice in the early evening hours and we were riding back to Col de la Faucille via La Vattay in beautiful sunshine. After a short photo stop at the pass we put on our wind breakers and plunged down to Gex and back home…a wonderful afternoon ride which turned into the discovery of unknown territory around La Dole mountain. 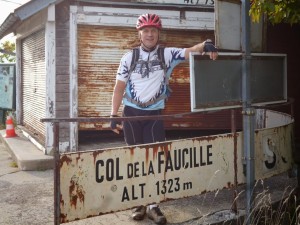