Last Sunday I climbed Col du Grand Colombier from Culoz together with my friend Will. It was the second time for me to ascend this monster mountain. Last year I rode it on my trekking bike from Anglefort. The road up from Culoz which the Tour de France visited for the first time in 2012 is extremely beautiful on the first few kilometers where the road zig zags up the southern side of the mountain. It offers nice views towards the south overlooking the Rhone river and Lac de Bourget, the biggest lake of France. 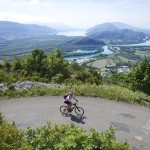 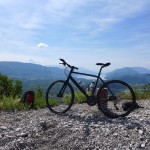 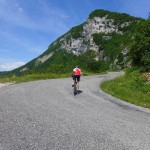 Will on the nicest bit of the climb 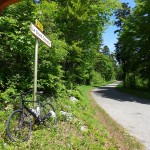 Last 3rd of the climb

The traffic wasn’t too bad for a Sunday. About 2km before reaching the top of the mountain we had a beer at the auberge to fill up the batteries. Will managed to place the order and we were served the golden liquid in less than a minute ! I never got a beer quicker than here 😉

At the summit we just stopped a little and decided to continue our ride down the west side to climb Col de la Biche, a pass which I never climbed before. At the lowest point we passed a field with fresh hay bales and Will insisted on a hay surfing photo shooting. 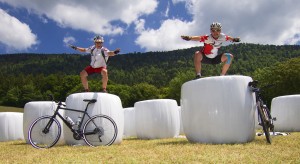 The climb up to Col de la Biche was quite tough as we were already tired and running out of food. With no bar in sight and dark clouds hanging around we kept a steady pace, shot a few pics at the col sign and at the summit area before quickly descending on the long and steep East side road. 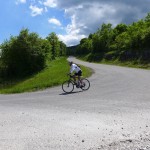 Long, steep descent on the East side 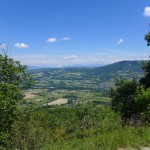 Nearly at the bottom 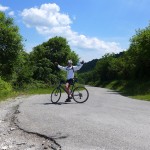 All in all a fantastic but hard trip – next time I’ll bring more bananas and dry fruit.