Trending
You are at:Home»germany»Spitzingsee – Wallberg
By Markus Albert on 28/06/2014 germany, hybrid

On my way to the Dolomites to participate for the first time in the Sella Ronda Bike Day, I passed by my hometown and profited from riding a small loop on my hybrid bike while the car was at the dealer’s garage for the fitting of a trailer hook. I started in Neuhaus and cycled up a small col named Spitzingsattel (1129m), continued downhill to Valepp and from there towards Rottach Egern, a small town close to Tegernsee, one of the most beautiful lakes of Bavaria (or even Germany). 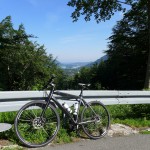 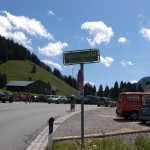 the closest col to my hometown 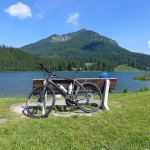 In Rottach Egern I decided to climb the paved Wallbergstrasse, a private road up to the Wallbergmoosalm (1117m), a small mountain restaurant at the northern flank of the Wallberg mountain, overlooking the Tegernsee valley. 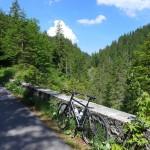 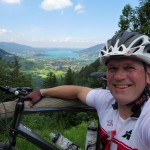 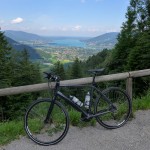 After a Bavarian lunch at Wallbergmoosalm, including a summit Weissbier, I descended that private road and cycled back to Hausham. As I still had plenty of time before recovering the car, I decided to climb up the steep paved road to Gindelalm (1242m). As my iphone battery stalled before I could record that climb I insert here the description of Gindelalm by quaeldich.de.

The road with hardly any traffic winds up through the dense forrest and towards the top offers two stretches of 500m each with 18% slope ! It is completely paved and can easily be climbed on a road bike, however three plateaus or very strong thigs are highly recommended! 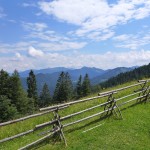 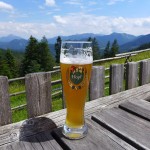 After a summit beer and a fruit tarte I descended back to the start point and picked up my car in Neuhaus. All in all a very nice ride with a tough but rewarding climb at the end.