Trending
You are at:Home»alps»Col de Joux-Plane
By Markus Albert on 28/07/2014 alps, france, hybrid

The last time I came up here was in March with my Norwegian friend and our XC skis, however by car and not on a bike like my friend Will once bravely did 😉 Today the road was reserved for cyclists only between 8:30 and 11:30 although only from the settlement of Mevoutier (about 6km below the summit) and not already from the bottom at Samoens.  I arrived a bit late in Samoens and only started around 10am by which time my friend Will was already close to the top. Honestly I expected more cyclists to profit from the closure for motorised traffic, but low attendance was probably due to the bad weather. Most of the riders already descended when I struggled uphill so I had to be careful not drifting too much towards the center of the road . I was one of the rare guys on a hybrid while the majority used road bikes. Maybe I could have done it on a road bike as well, but I wanted to be sure to reach the top without walking. The road is quite well tarmaced, only at the top are a few cracks and potholes – a tribute to ice and snow in winter. The road to the col is usually kept open in winter to allow access to the XC slopes (around 10km) in case there is not enough snow down at the bottom of the valley. There is even a navette service operating on a regular basis.

I arrived at exactly 11:30 at the summit where a bunch of cyclists was gathering around the food stalls which had been set up here for the brave folks making it to the top. They had a few types of local cheese, bred and softdrinks  – a great idea! I helped myself a bit with the freebies and continued to the restaurant terrace where I ordered the well deserved summit beer while waiting for Will to show up.

nice surprise at the top 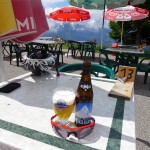 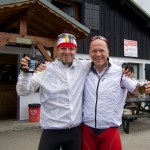 and another one – cheers !

My Canadian friend eventually arrived shortly before I had finsihed my beer and had done the Morzine climb while I was ascending from the Samoens side. We ordered another beer and rolled together to Col de Ranfolly for a few pictures before returning to Joux-Plane. There were many MTB downhill freaks coming up with one of the chairlifts to descend in full protective gear the specially prepared downhill tracks close to the ski slopes. Many ski stations in the Alps profit from this clientele and keep a few strategic lifts open for hikers and bikers. 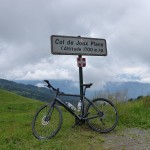 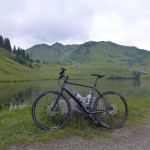 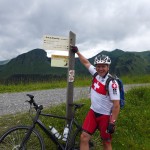 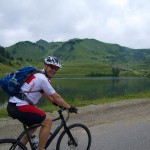 Will insisted on this one…

I decided to have lunch at “Relais de Vallees” where we had the beers while Will headed back down and home to see the last stage of the Tour de France (the “procession” as he called it) . The clouds got denser and the sun completely disappeared by the time I descended back to Samoens. I nevertheless still met cyclists who attempted to climb up…the cheese at arrival had of course long gone and the desserts probably as well 😉 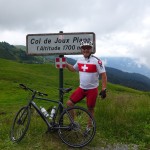 A false Swiss in Haute Savoie

Col de Joux-Plane has appeared 11 times in the Tour de France so far and was classified as “hors categorie” (beyond classification) 6 times. The Tour first climbed it in 1978. From Samoens the ascent is 11,7 km long with a dénivelée of 989 m and a slope of 8,7 %.
Share. Twitter Facebook Google+ Pinterest LinkedIn Tumblr Email