A sweat name for a monstrously brutal climb, especially if you ride it on a road bike. I had an eye on it since last year but were always too afraid to give it a try, because I had read so many tough reports about it that I got scared. End of September on a fantastic autumn day I finally convinced my weaker self to head down to Bourget du Lac and fight the beast. I chose the hybrid as my preferred weapon and started my ascent right at the townhall. The first two kilometers are still ok with average inclinations of 6-7%, but then the hard work starts…11km at ~10% ! Fortunately most of the climb runs through a dense forrest which protects from the sun but doesn’t provide for any panoramic views as climbing up. 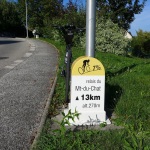 first marker – a long way up… 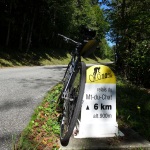 power bar break half way up

For a Sunday the traffic was not too bad and I only saw cyclists coming down the side I climbed until I reached the top where a guy on a road bike arrived a few minutes after me. The panorama at the summit was fantastic and truely worth the effort. The small restaurant serves good local food and most important – cool beer ! 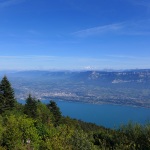 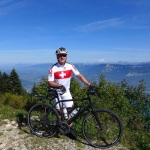 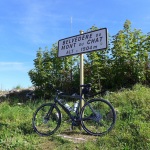 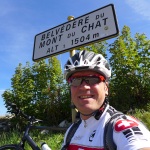 ready for the descent

I descended on the West side to make a loop passing over Col du Chat, a very low altitude pass above the tunnel through which the main traffic flows. The West side of Mont du Chat is equally steep and contains stretches with average gradients of 12%. After Col du Chat one gets very beautiful views over Lac de Bourget, the biggest lake of France. 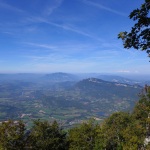 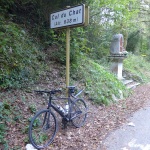 my easiest col this year 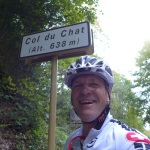 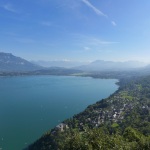 view over lake and town 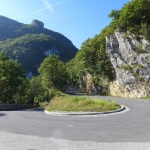