Our second MTB trip started in Genolier after arriving there by car. We climbed on our bikes the paved road from Bassins up the Jura following teh Swiss national cycling route #7 and at the junction where the national MTB route #3 split off, we followed it until arriving at Col du Marchairuz. I had already climbed until that junction and further on my touring bike and on the racer, but never came here on the MTB. At exactly that place I had a flat tire three years ago with my touring bike and still remembered that unfortunate moment.

We didn’t encounter any other people but arrived a bit late at the col to have lunch, so we only ordered a few drinks (= beer) and a plate of cheese and bread, although it needed a bit on insisting as the waitresses were anything else than friendly. With a full stomach we continued our tour, first descending from Col de Marchairuz before returning on the small but paved road towards “La combe des Amburnex” and L’alpage des Amburnex. After chatting a bit with the cheese makers there, we bought two pieces of Gruyere and continued our journey descending back to Bassins and Genolier, where the car was parked.
My friend Klaus was very enthousiastic after that trip as he had seen a typical part of Switzerland, an alpine cheese farm included. We arrived at home a bit tired but very happy and HUNGRY ! 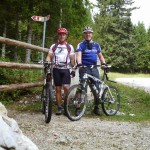 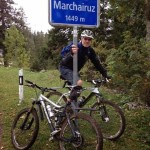 the dirt tracks are behind us… 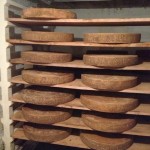 The best Gruyere cheese I ever tried !