Originally I planned a 6 day trip through the Sierra Nevada with Almeria Bike Tours, but unfortunately I was the only cyclist who had signed up for it. Instead of cancelling the journey and losing my flight tickets, I nevertheless flew to Andalusia and Francis, the only Spaniard I know who speaks Bavarian, organised a 4 day program for me, including the climb to Pico de Veleta (3398m), the second highest peak of the Iberian Peninsula. Only its neighbour Mulhacen is a little higher (3478m), but unfortunately there’s only a foot path up…

The day before the climb we arrived by car at Hoya de la Mora (2500m), the last village at the ski station. For motorised traffic the road ends here, with the exception of a shuttle bus which transports hikers to about 3100m. The road to the top of Pico de Veleta is in pretty good shape, apart from a few spots with huge potholes and gravel spread across the road. Only the last 100m are gravel but rideable on a road bike. After our descent we crossed two locals on road bikes who climbed at an incredible pace. 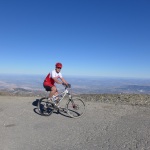 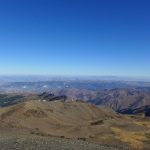 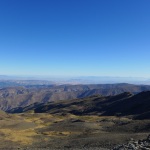 The only unpleasant handicap on our way up was a gusting wind which blew very strong all morning and only stopped once we were over at the other side of the mountain. At moments we had to balance on our bikes in order not to get blown away. The only good thing was that the road meandered up, so every second bend we had the wind from the back. I was positively surprised that the lack of oxygen was not too punishing. I neither felt dizzy nor did I get any headache 😉 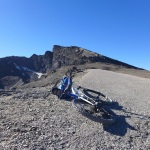 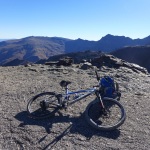 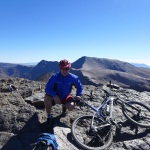 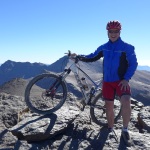 the air is thin up here

We continued our way passing Paso de Carihuela (3205m) before descending a long a flowy trail to Trevelez, the highest municipality of the Peninsula. The GPS recording on my iPhone stopped too early due to lack of battery power. I should really invest in a proper GPS device. 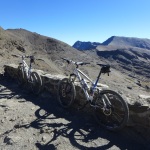 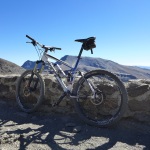 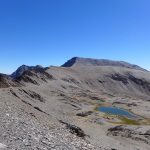 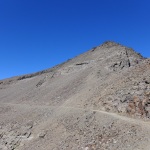 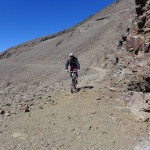 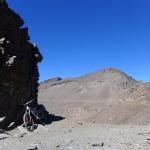 Mulhacen by foot or down for a beer?

According to wikipedia, the road up to Pico de Veleta is the highest paved road in Europe. Francis told me that he crossed the col some 20 years back on a Vespa. At that time the road was still open for traffic.
Share. Twitter Facebook Google+ Pinterest LinkedIn Tumblr Email