Trending
You are at:Home»jura»Combe aux Cerfs
By Markus Albert on 19/07/2014 jura, mtb, switzerland

The day before climbing Col de Sanetsch I wanted to discover a small and yet unknow mountain road up into the swiss Jura which starts to climb after a bend at the exit of Arzier, a village in the canton of Vaud below St. Cergue. I had gone past that junction in the past while climbing Col de la Givrine on the road bike  from the east side, which is a little nicer and quieter in terms of traffic than the road from Gingins. I chose the MTB as I also wanted to explore the little tracks that branch off the main road at the top. Unfortunately I had to abandon my plan of closing the loop to ride back to the start point via a track which reaches Col de la Givrine because the forest road got to muddy (it had rained heavily a few days before) and I had no intention to push the bike and get really dirty. 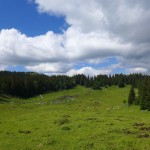 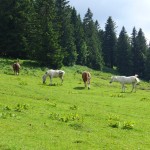 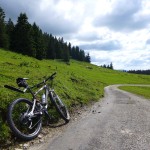 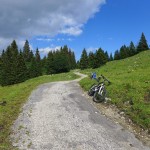 I love the Jura !

My first destination was the chalet d’Arxiere where I met another MTB cyclist, horses and of course plenty of cows. After a little break I turned back, lost some altimeters and climbed the road to chalet “Le Croue”, where I only heard the cows who were hidden somewhere in the forest. 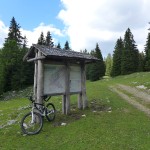 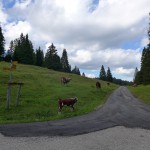 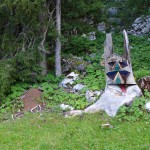 The clouds got denser so I didn’t spend much time there and descended to the branch off which leads to Col de la Givrine, passing the farm “Le Vermeilley”. The paved road ends at that alpage and a dirty mud road winds gently uphill. As it was getting muddier and muddier, I decided to return back to the car on the road I climbed up instead of going westwards to Col de la Givrine. On my way down I met another herd of happy cows and calfs which starred at me as if I were a martian… 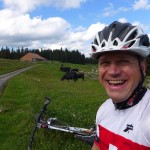 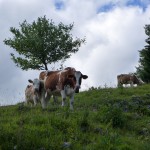 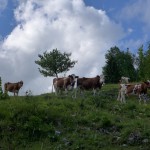