Trending
You are at:Home»germany»Rotwandhaus
By Markus Albert on 26/09/2013 germany, mtb

Yesterday was a fantastic Indian summer day in upper Bavaria and after picking up my freshly serviced mountain bike, I decided to climb up to Rotwandhaus (1737m) from my mum’s old house in Josefsthal. I wasn’t sure if I could do it because after my last ride I had some pain in my right knee. After the first few 100 altimeters I felt that I had a good day and this feeling got confirmed while finishing the ascent to Spitzingsattel, a kind of pass at 1100m. The decision to continue from there on was taken and so I continued my ride on a quick pace, even overtaking other riders on my way up. I had last done this route about  2 years ago and still remembered that there were two really steep ramps, but as I felt strong that day I knew I would master them without problems. Indeed these two parts were pretty steep (one at 18% over 700m!) and I had to use my biggest sprocket, which I didn’t use until that point. Once I had mastered those monster ramps I continued gently but steadily and my thoughts were already occupied with deciding what lunch I would order at the mountain hut that was approaching quickly. The view on the top was fantastic and I felt lucky to be there on such a nice day. The pain was well worth it and hungry like a wolf I started queuing up for lunch. I was hesitating between “Kaiserschmarrn” and “Kasspatzn” and went for the latter, cause Kaiserschmarrn in combination with wheat beer often creates heavy gaseous activity in my intestines…
A fairly strong wind was blowing, so I finished lunch quickly and enjoyed sitting on the meadow away from the crowds, taking photos and enjoying the panoramic views towards Austria and the Bavarian mountains.
During the descent I was still enjoying the wonderful views and although there were many hikers walking back down, I still liked the downhill section. 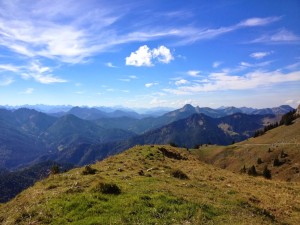